I think of promises when I think of Mary. She was from a people promised by God. She was promised to Joseph in betrothal. She alone was promised in a new way by God that she would conceive a child that would be Himself. Then she herself promised to participate in this mystery and miracle.

I think of waiting when I think of Mary. The world waited for thousands of years for One who would help them turn around right.
Mary waited her 40 weeks of pregnancy. Did she smile in wonder? In those times when a baby-in-waiting was hidden, there was no sonogram, no medical reassurances. Wondering was different then. Waiting was for the unknown.

I think of songs when I think of Mary. She said “May it be to me as you have said” (Luke 1:31) The next words we read , she is singing praise that sounds like “Joy to the world, the Lord is coming! Let every heart prepare him room. My heart already has!” This was the first lullaby for Jesus. He who neither slumbers nor sleeps and keeps me, chose to enter the form of a helpless baby who needed keeping and sleeping.

Did Mary press her hand to her belly in amazement? As this sweet mystery grew in her womb, did she sing still? As the little butterfly kicks began did her eyes grow wide and weepy? The biggest thing that ever happened to her was so small it could not be seen. As her body and her heart made room did she laugh and cry equally as often and pray to understand?

As the birthing began and song became breathing and bearing, in the mighty work and pain, was God magnified still?
As the minor lament changed key to major praise, did she once again sing with exultation? Did she hold Jesus close and rock side to side in that instinctual gesture all mothers do? Did she whisper her love lullaby and tenderly cradle him as she pondered? Did she remember the prophet Zephaniah’s words? “He will take great delight in you. He will quiet you with His love. He will rejoice over you with singing.” 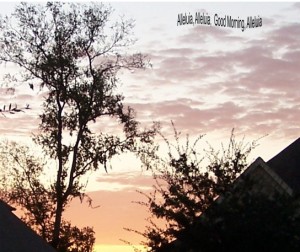